The Club briefly played on the Meadows by the River Trent before moving to Bulwell Forest and in 1901 it moved to Hollinwell.

Golf started in Nottingham in 1864 when John Doleman, a Scot from the famous golfing family in Musselburgh, moved to the area and took his clubs for ‘the then apparently daft-like amusement of knocking a small ball about’ in the Meadows.

It was in 1887 when the Right Reverend Baynes sought out John Harris, an architect, that the Notts Golf Club formed. There were only 36 golf courses in England at that time.

The Public Parks Committee agreed that they could use land at the Queen’s Walk Recreation Ground near where Wilford Bridge now crosses the River Trent and a seven hole course was laid out.

However, within a few months the flat course offered an insufficient challenge to the golfers and they moved to Bulwell Forest. The land there was sandy, gorse covered and considered more appropriate for golf so a new six hole course was laid out which being extended to 18 holes by 1894.

This new course was conveniently near to Bulwell Forest Station on the Great Northern Railway. The station master Mr Williamson allowed players to keep their clubs under the stairs and Mrs Williamson provided tea and refreshments. Their son Tom cleaned clubs, the family were unaware of the incredibly long association Tom would have with the club.

Bulwell Forest accommodated a considerable number of footballers, cricketers and walkers and it was not unusual for golfers to find a family picnicking on a green at the weekend!

Search for a new home

In 1897 the City Council proposed building a cemetery on the common and though this idea was abandoned this, along with the crowded nature of the course, spurred a few forward-thinking members to look for a new site.

One member, Mr C R Hemingway, while surveying for the Manchester, Sheffield and Leicester Railway (soon to become the Great Central Railway when its line was extended south from Sheffield as part of a link to join the Metropolitan line and on to a planned channel tunnel), noticed the “bleak and barren hills of Annesley admirably varied in character”. The land was uncultivated and infertile but its sandy soil was ideal for golf. The site lay thirteen miles north of Nottingham and for it to be a viable proposition it needed a train service as there were few cars at the time. The Great Central Railway agreed to build their new line with a station to serve the course if it would guarantee receipts amounting to £200 a year and this was done. The land was owned by the Ecclesiastical Commissions who leased it to the club for £25 a year for 25 years.

Willie Park Junior was engaged to inspect the land for its suitability and then to lay out an 18 hole course. He won the Open the same year as well as laying out Sunningdale ‘Old’ Course.

In October of 1900 the proposals were formally brought before the club at a general meeting at The George Hotel, Nottingham, to move the club from Bulwell Forest to the new course at Kirkby Forest. Proposals were carried by one vote, which was just as well as work had already begun. The name of Hollinwell was adopted after the spring next to what is now the 8th tee. The new course was eventually opened in November 1901 at a cost of £4,850.

In 1902 a telephone line was installed from the signal box to the clubhouse to notify staff of members arriving.

As soon as the course was opened the Haskell ball gained popularity and the course needed lengthening. Tom Williamson and J H Taylor adjusted the course over the next few years and in 1906 it held the News of the World Matchplay Championship with the largest purse in the World, quite an accomplishment for a new course. In 1913 Tom Williamson and J H Taylor added three additional holes at the start of the course allowing it to be extended and make it equal to any championship course in the country.

In 1913 the Ladies Open English Championship was inaugurated at Hollinwell.

In June 1924 the club purchased the land from the Ecclesiastical Commission and play on Sundays was allowed for the first time.

In January 1954 a Lancaster bomber belonging to Rolls Royce, crashed near the 14th fairway. Lady golfers on the course at the time helped the slightly injured pilot and 3 technicians from the plane. As a thank you Rolls Royce provided the club with a trophy which the ladies now play for.

The original building at Hollinwell was destroyed by fire in 1924. The following year a new one was opened by the Duke of Portland, owner of Welbeck Estate in The Dukeries.

The only surviving relic from the fire was the bronze memorial plaque commemorating the twelve members who gave their lives in World War 1 of the sixty-one who served, and this was incorporated into the new clubhouse above the lounge fireplace.

The building has been altered over the years but still provides magnificent views of the course and entrance drive, much to the enjoyment of members and visitors alike.

Discover the amazing heritage of Hollinwell

The Course and Architects » 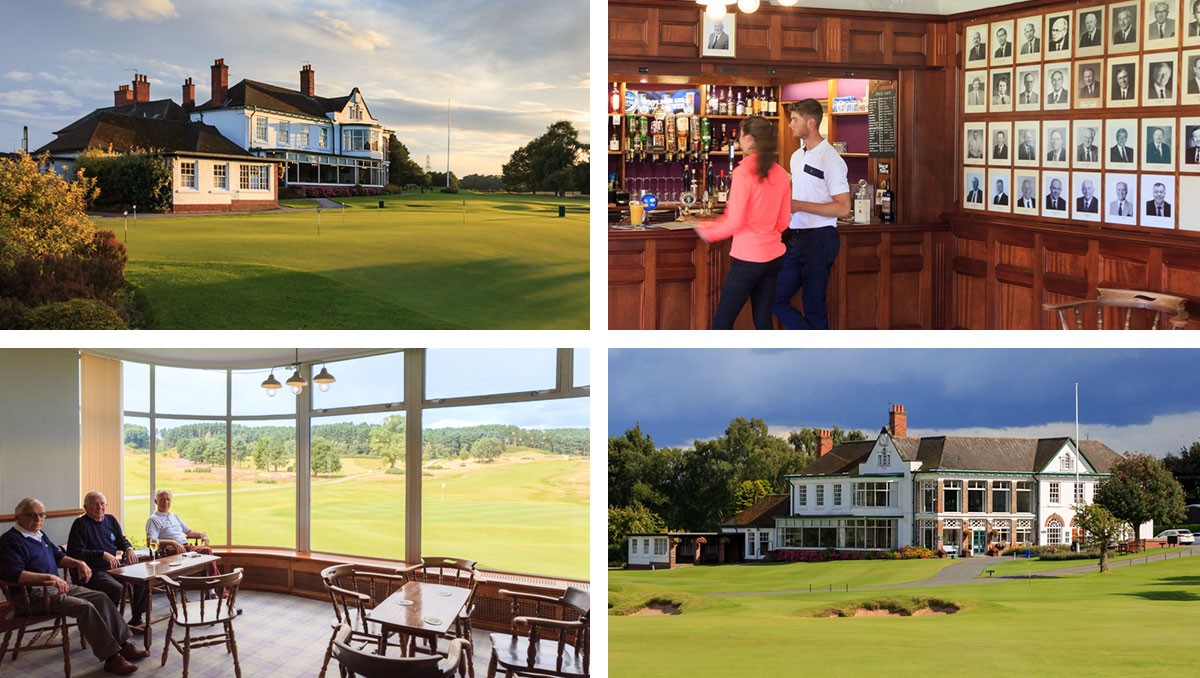